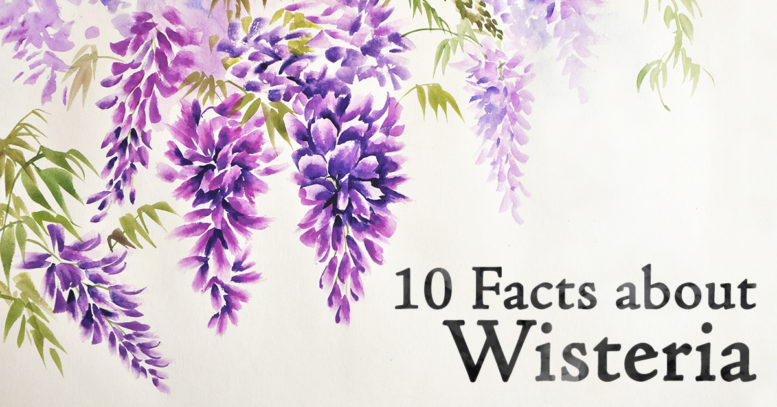 Wisteria is a beautiful, delicately scented climber that graces many a wall in the UK. Ideal for training up structures, pergolas and trees, it’s a popular plant and loved by many. Here are our top 10 facts about this popular climber.

#1: Wisteria is part of the legume family

The legume family is also home to peas, beans, lentils and clover!

Along with at least 92 others. He was born in Long Preston, Yorkshire, but travelled to the Great Lakes of North America in 1810, with fellow botanist John Bradbury.

#3: The Wisteria is named in memory of Dr. Caspar Wistar

Dr. Caspar Wistar (1761-1818) was an American physician and anatomist. He was an early promoter of vaccinations, cousin of American Revolutionary diarist Sally Wister and also a friend of Thomas Jefferson.

#4: Two of the most popular Wisteria can be identified by how they climb!

If it twines its stems clockwise (seen from above), it’s probably a Japanese Wisteria (W. floribunda). The Chinese Wisteria (W. sinensis) however, twines counterclockwise – and this is the most common one in the UK.

#5: There are ten species of Wisteria

And they are native to China, Korea, Japan, and the Eastern United States. Chinese Wisteria was the most common species in the UK for many years, until other colours and species were gradually introduced.

#6: The world’s largest known Wisteria is in California

The Chinese lavender variety is in Sierra Madre and was planted in 1894. It’s been recorded to be over 1 acre in size and weighing in at 250 tons!

#7: It can take decades to bloom

Although hardy and fast-growing, Wisteria grown from seed can take decades to bloom. Gardeners are therefore most likely to buy and grow plants from root cuttings or grafted cultivars.

If left to grow unsupported, it will create a mound. It therefore needs strong supports, as it’s both strong and heavy, often producing wrist-thick trunks and stems. If left unaided, it can cause damage to thin trees, latticework, gutters and downpipes, due to the fattening of its stems as they grow.

Rich in flower-producing potassium and magnesium, a generous helping each March will ensure regular flowering and healthy growth.

They’re too greedy for water and food. If you don’t have a suitable sunny wall to grow a Wisteria, opt for a free-standing ‘standard’ on a 5 foot bare stem – as suggested by Alan Titchmarsh!