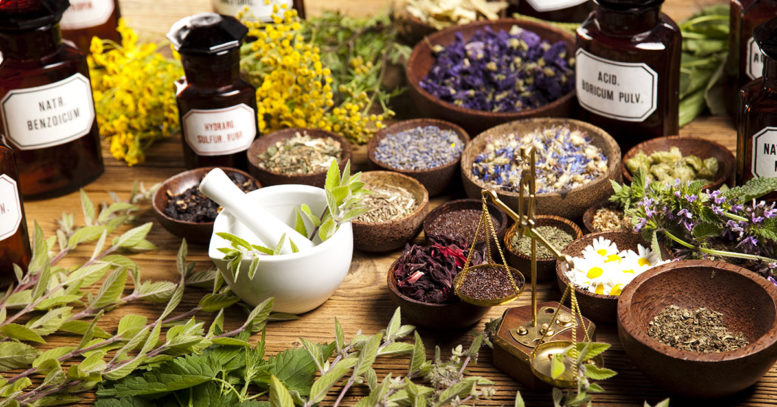 Herbalism or botanical medicine is one of the oldest traditions around. The Egyptians used herbs for medicine, as did indigenous healers around the world. In Britain, herbalism can be traced back thousands of years. The British Library has a copy of a ‘leech book’ – thought to date back as far as the 800s CE! Medieval lay healers used herbs, as did apothecaries, whilst many towns and villages had their own plant and herb expert around, to help them cure ailments and diseases.

But how did this lay the groundwork for herbalism, as we now know it, and how big a part did the Victorians play?

The apothecaries of old

By the 1200s apothecaries were growing in popularity. These early ancestors of our modern day GP were selling wines, spices and herbs to physicians and the general public, as well as sharing their medical advice and knowledge. Apothecaries gained their knowledge through working apprenticeships and, from the 1500s, even through university study. In 1617 the Society of Apothecaries was born in England. This broke them away from their grocery roots and enabled them to have more selling freedom. This saw a rise in patented medicines, as well as the ‘miracle’ ‘cure-all’ and ‘quack’ remedies!

By the 1700s apothecaries were the most common medical practitioners around. Medical students could become a ‘surgeon-apothecary’, meaning they could dispense drugs and carry out minor surgery, without going to University.

Herbalism and the Victorians

Throughout the Victorian period, pharmacists were experimenting, and some great medical breakthroughs and advancements were made – especially between 1837 and 1901.

Dr. John Snow proved that the disease cholera was spread through contaminated water from a pump in busy Soho. Up to this point, it was believed to be spread through miasmas or poisonous vapours in the air.

Antiseptic surgery and the invention of anaesthesia in 1846 created some incredible breakthroughs in medicine during this period too.

The birth of the Victorian pharmacist

It was also during this time that the role of the apothecaries started to change, as the Victorian pharmacy brought medicine and healthcare to the general population. Here, the different ingredients for each ailment were measured out and mixed by a pharmacist. Herbalists worked with doctors, informing them of which herbs and plants would work best on certain ailments. It wasn’t until later in the Victorian era, that the position of a pharmacist became a specialised job – up to this point, anyone could set themselves up in the role!

Natural herbal remedies were still seen as an essential part of any Victorian lifestyle, as many couldn’t afford a doctor. Instead, they relied on natural remedies, often handed down through the generations. From the use of leeches, opium and morphine, through to the more mellow herbs, plants and honey, these remedies often worked well – but there were some that would be considered dangerous, by today’s standards.

In 1843 the National Association of Medical Herbalists was established by a group of herbalists from the north. It was set up as a professional body to regulate herbal medical practises within the United Kingdom.

In 1931 Maud Grieve published her book entitled A Modern Herbal. It covered her knowledge of herbs and plants to be used in medicine, along with cooking, skincare and cosmetics.

Prior to this, Nicholas Culpeper had published the first herbal self-help book in 1653. Entitled The Complete Herbal, it was published to help anyone look after their health. Doctors were expensive and Culpeper had firsthand experience of this. As an herbalist, astrologer and pharmacist, he’d healed the poor around London for free, using herbs from the countryside.

Today, the World Health Organisation (WHO) lists herbal medicine as the most popular type of traditional medicine in western Europe. The National Association of Medicinal Herbalists is still thriving, (now known as the National Institute of Medical Herbalists) and it represents over 700 herbalists within the United Kingdom and internationally. As for Grieve and Culpeper – both books are still considered the best of the classics, in terms of the use of herbs and herbal remedies.