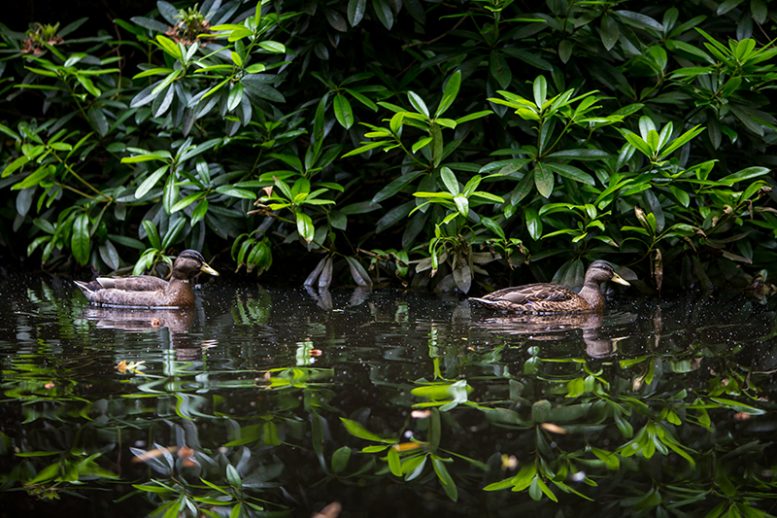 The artificial ornamental lake at Grim’s Dyke must have been one of the biggest gardens and grounds projects undertaken by Sir William and Lady Gilbert. The original lake was way beyond the house and ornamental gardens, so, under Sir William’s direct supervision, it was extended, firstly in 1899, then again in 1905, until it reached a surface area of 1.5 acres.

Work began in 1899 and took the labour of fourteen gardeners to complete. It comprised of a punt house and changing hut, a promontory with an artificial rockwork cascade, that jutted into the northern end of the water, and an island at the southern end. This island was home to the Charles II statue, carved by Cibber in 1681. 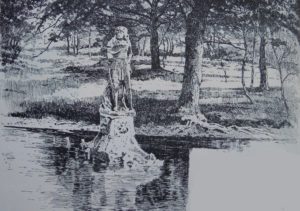 The statue originally stood in Soho Square, but was given to Goodall, a previous owner of Grim’s Dyke, for safekeeping and restoration, whilst Soho Square was being renovated. Gilbert therefore took over the ownership of the statue, once he bought the property, and was reluctant to give it back, despite requests from its owner. It fell to Lady Gilbert to settle the debate and bequeath the statues return in her will. It was finally restored to its place in Soho Square in 1938.

The lake at Grim’s Dyke was drained and refilled each year, to keep the water clear, and was stocked with trout. Each summer, between the months of March and September, Gilbert would go swimming in the lake, on a daily basis. He also gave private swimming lessons to local children – and it was during one of these lessons, when he was giving a lesson to two local girls, that he suffered a heart attack and died.

Lady Gilbert ordered the lake be closed off and largely drained, after her husband’s death in May 1911.

Over the next century or so, silt built up in the lake area, providing new habitat for trees and plants to flourish. This led to the lake getting divided over time, creating several smaller ponds and, it was in 2011, some Great crested newts were found on these smaller ponds.

Great Crested newts have full legal protection, under UK law. This makes it an offence to capture, injure or disturb them or their habitat. Due to this important find, parts of the lake area have now been cleared and restored to form a smaller lake, in a joint restoration project with Froglife wildlife charity.