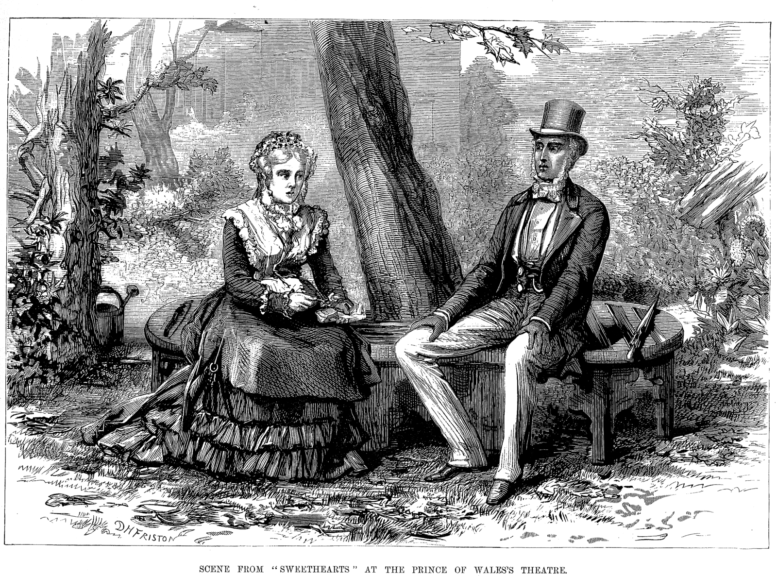 If you cross the road from Victoria Embankment, on the retaining river wall, the northern side of Hungerford Bridge, you’ll find the memorial to Sir William Schwenck Gilbert. Showing a bronze side profile of the dramatist, it has two wreaths above, a shield below and two women depicting tragedy and comedy. Tragedy has a book on her lap and is handing Gilbert flowers, whilst Comedy has puppet characters from the Mikado and is staring at one in her hand. 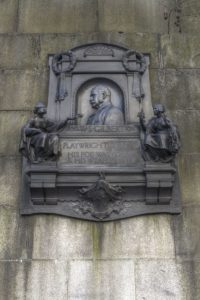 The epitaph plaque between the two women states: ‘1836 W.S. Gilbert – 1911. Playwright & Poet. His foe was folly & his weapon wit’. On the scroll with the shield beneath, it states ‘Mallem mori quam mutare’, which translates to ‘I would rather die than change’.

The memorial was created by British sculptor and leading member of the New Sculptor movement, Sir George James Frampton. It was erected in 1915.

Frampton was born in London, on 18th June 1860. His father was a stonemason and Frampton was a practicing artist at the Royal Academy of Arts, earning him is Royal Academician status. Frampton refused to limit himself to one single medium. He preferred instead, to use a material for the effect he desired, and therefore, drew upon many materials, including bronze, marble, mother or pearl, shells and amber, and even ivory, lapis lazuli, gold and silver in his work.

Frampton’s most memorable works include the bronze statue commissioned by, and depicting, J. M. Barrie’s famous literary character ‘Peter Pan’, in Kensington Gardens, the lions at the British Museum and Edith Cavell memorial that stands outside the National Portrait Gallery.

Married to artist Christabel Cockerell, Frampton had one son, painter and etcher Meredith Frampton. George Frampton died on 21st May 1928 and his ashes lie in a niche on the ground floor of easy wing of the Ernest George Columbarium.

Interestingly, if you cross the road and go back into the Victoria Embankment gardens, you’ll find a statue of W.S. Gilbert’s previous partner, Arthur Sullivan.

Created by Welsh sculptor Sir William Goscombe John, the statue was unveiled by Princess Louise on 10th July 1903. A weeping muse leans against the stone pillar, on which the bust of Sullivan stands, mourning his loss. Below the bust is an inscription of W.S. Gilberts words from The Yeoman of the Guard, ‘Is life a boon? If so, it must befall that Death, whene’er he call, must call too soon.’ At the bottom of the pedestal lie some sheet music, a mandolin and a pan mask.  Sullivan’s statue looks towards the Savoy Theatre and is only a few hundred yards away from Gilbert’s statue – seemingly brining the pair closer once more, near a place they both loved.