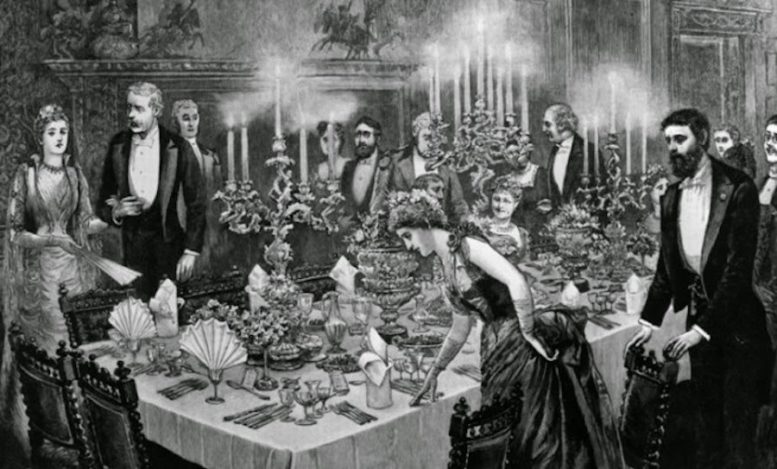 Victorian dining was a complex affair. Not only was there the formality or writing to ask guests to attend, there was the complexity of organising who sat where, what dishes to serve (along with how many!) and ensuring that all guests would have an enjoyable evening.

When it come to the actual evening, the table needed to be set right, looking beautiful but not overtly displaying signs of great wealth. There were etiquette rules around how the cutlery was set out, as well as how everyone behaved whilst at the table. Dining in Victorian times was indeed, complex!

A Victorian dinner party table was set out in a set fashion. Each place setting had a plate, two large knives, three large forks, a soup spoon, and a water goblet set to the right of the plate. If you were serving a fish dish, each guest also needed a fish fork and knife or a small oyster fork, if needed. The oyster fork would be placed to the right of the plate, next to the knives, as would the soup spoon; all other forks were on the left side of the plate. A small plate would be placed to the top left of the main plate, for guests to place bread on. 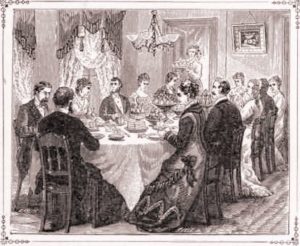 The hostess would make the decision as to which gentleman would accompany each lady to the dining table. The host would sit at the foot of the table, the hostess at the head. The table itself was to be beautifully adorned and spread out. This included place settings and name cards, the cleanest china and shiniest cutlery. Fruit plates and other general dishes were arranged in the centre of the table.

Ladies would be seated first, followed by the gentlemen. It was the gentleman’s duty to ensure his escorted lady had been provided for, before helping himself and, if requested, passing on the dish to the next man – who will then repeat the process for himself and his escort. Each man would oversee the lady he’d escorted in, expressing her wishes and orders to the waiting staff.

Smelling or examining any of the food was a definite breach of etiquette, as was chewing with your mouth open or speaking with food in your mouth. Being polite to the waiting staff was just as important as being polite to your hosts. You never shouted at them, voiced your displeasure at anything, and never apologised for calling them forward to serve you – as it was their job to do so! Similar rules applied to the host and hostess. They were to never say a bad word about each other or to chastise their staff in front of the guests.

Food was to be enjoyed, not rushed, so dinner was to last at least one hour. It was considered bad manners to eat too much of anything, to the point that it was noticed, as was picking up boned meat to clean remnants of meat off the bone. You also needed to show decorum by refraining from commenting overtly about any of the dishes – everything should be considered as favourable as the next.

Once the meal was over it was polite for all guests to retire to the drawing room and to stay at least one hour afterwards – although two to three hours was the norm. Conversation needed to always be light and positive, to refrain from any heated debates or arguments.

Victorian dining and dinner parties were formal affairs however, they were considered the highlight of any social event. By following the etiquette rules and correct table layouts, the hostess would ensure her party was well received and well talked about, long after the event had finished.