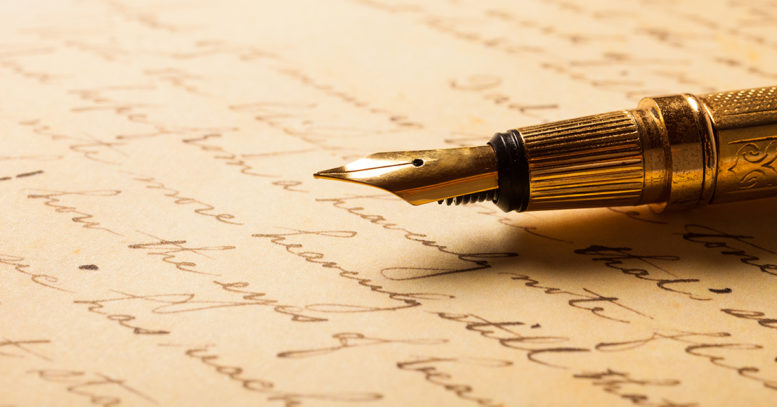 W.S. Gilbert loved writing letters. From the short to long, plain to illustrated, he loved to put his thoughts and opinions down on paper to share with friends and confidants. He would always show a notable, if ironic, courtesy to the recipient of his words, regardless of whether they were friend or foe.

His letters gave a glimpse into his preferences too – he much preferred the friendship of women, although a brainless beauty bored him! It is therefore of little wonder, that the pen pals of W.S. Gilbert were most often of the female persuasion. Here are a few that still have evidence of his correspondence.

W.S. Gilbert started writing to Mrs Talbot in 1894. The friendship via letter continued until just before his death in 1911. Mrs Talbot was often an invalid and the letters bought her much joy. What started as a birthday letter, ended with them becoming regular and firm pen pals.

Although they were not related, Gilbert started to refer to her as ‘my dear cousin Mary’ and signing his letters with ‘yours affectionately, cousin Bill’. The word was used in a teasing way, as her mother was American. Mrs Talbot would send Gilbert a letter on his birthday every year and Gilbert would always promptly write in return.

One of Mr Cyril Maude’s daughters, Margery, was a child when she met Gilbert. He was a family friend and they used to visit him at Grim’s Dyke annually.

Their friendship began when Gilbert wrote to her mother, Lady Katherine Coke. He asked her to forward his love and regards to the ‘young lady whom my constitutional bashfulness scarcely permits me to call Sybil’. He then began writing to Lady Crutchley herself, often illustrating the letters and frequently changing the salutation. ‘My dear Crutchley’ and ‘My beloved Gal’ where popular openers!

Mabel was the daughter of Mrs Lewis (Kate Terry). Her mother had met Gilbert when she was 18 years old and the friendship continued with her daughter. Mabel and Gilbert had a shared love of animals and letters between them were always affectionately fun.

Gilbert had an affection for young women and Miss Beatrice was no exception. His letters to her began in 1878 and showed the attractive side of his personality. Often referred to as ‘My beloved B’, Gilbert used to sign off with ‘Uncle Bill’.

Annie had no connection with the theatre, however, she was an intimate family friend. Letters to Annie were always affectionate, sympathetic and friendly.

The letters Gilbert wrote showed him at his most relaxed, as documented in W.S. Gilbert: his life and letters – a book by Sidney Dark and Roland Grey. Many show the real person behind the operas – someone who had a big heart and an equally big sense of fun.