When it came to selecting the most ornate room in a Victorian house, chances are it was always going to be the Parlour. It was the only room in a traditional Victorian house that was created predominantly to illustrate your wealth and status in society. And this made it the ideal place to entertain your guests.

The word ‘parlour’ originated from the Latin word ‘parlare’ (meaning ‘speak’) and the Anglo-Norman French word ‘parlur’, meaning ‘place for speaking’. So essentially, the ‘parlour’ was the speaking room or audience chamber.

In smaller properties, the parlour was at the front of the house (hence the phrase ‘front room’), however in larger properties, it could well have been at the back of the house, to ensure your guests had a chance to walk along the main walkway or corridor and witness the splendour of the rest of your home.

A visual display of wealth and status

As this room was a visual display of your wealth and status, it went without saying that it was also the most cluttered room – both in terms of furniture and ornaments, as well as colours and patterns. During the 18th Century, this room would have been decorated in rich colours – burgundy, gold, blue and dark green – however, the colouring became more muted as we moved into the 19th Century. It was also decorated with decorative patterned wallpapers, carpets and ornate wooden carvings.

It was considered bad form to not have enough chairs for your guests, so the parlour often had lots of chairs crammed in amongst the other furnishings. This was especially important, as it was considered highly rude for a gentleman to offer up his seat to a lady, as the seat cushion may still have been warm from him sitting on it!

The walls would be adorned with the best of your family’s art collection and there would be family photos, bric-a-brac and ornaments cluttered around the room.

Parlours are saved for Sundays!

Unlike modern sitting or lounge rooms, the parlour would only have been used on Sundays, to entertain guests and to celebrate family occasions, such as weddings, births and deaths. The rest of the time, the room was kept closed and a large, heavy pair of curtains would be pulled across the windows, in order to prevent your very best furniture and ornaments from fading in the sunlight.

It wasn’t until the 20th Century that the parlour was replaced with the less formal sitting, living and drawing rooms. These rooms all offered the chance of a more relaxing surrounding and less formality; space the entire family could enjoy – not just your guests! 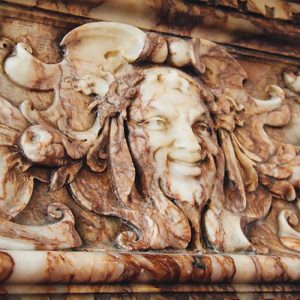 One of the Alabaster Fireplaces at The Grim’s Dyke

Take a look into the lives of the Victorians

Whilst The Grim’s Dyke has been a hotel, wedding venue, and conference venue since the 1970s, many of the original touches from W.S. Gilbert’s days still remain, such as the ornate fireplaces, wood panelling, ceiling adornments, and lattice windows.

The hotel, restaurant and bar are open to guests and non-residents alike, so why not plan your next stay and dive into life as a Victorian (no offering your seat, mind you!)