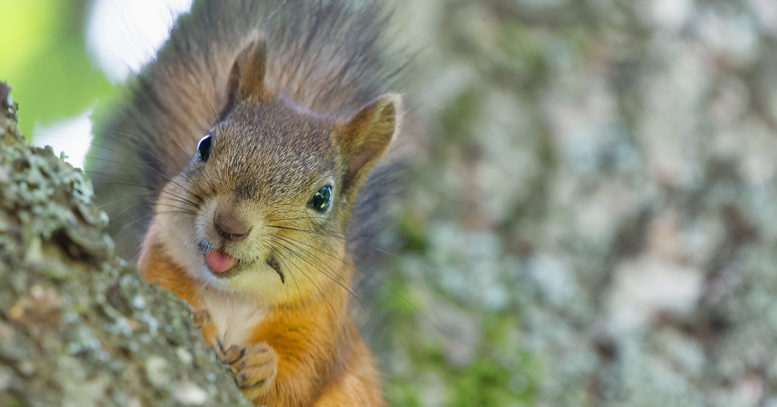 Unfortunately, due in part, to the Victorians love of travel and collecting, grey squirrels started to appear in the 1870’s. Bought back from America, they were seen as fashionable additions to the estates. Now though, with an estimated population of over 2 million, they heavily outnumber the 10-15,000 red squirrels, thought to still be around.

Although the majority of red squirrels now reside in the North East of England and Scotland, grey squirrels are a common site in the UK – and a glimpse of a squirrel is a real treat for old and young people alike.

So, what makes squirrels such an endearing part of the countryside? Here are some squirrel based facts.

#1: Grey squirrels are active during the day

You’ll often see a grey squirrel during the day, simply because this is when they’re at their busiest. They’re busy foraging for food, both on the ground and in trees – as well as the occasional bird feeder!

#2: They can have two litters a year

Grey squirrels breed during January and April when food is plentiful. During summer they may even have a second litter.

#3: Squirrels are active all year

Squirrels are always on the hunt for food, regardless of the time of year. Add in the fact they’re not too shy, you’ll see them in woodland, parks and hedgerows – although they prefer woodland.

#4: They have no need to hibernate

Although squirrels store seeds and nuts, they bury them simply to ripen or to cover hard times. They have such a varied diet, there’s available food for them, all year.

Squirrels will eat whatever is in season, which is why they don’t need to hibernate. They love tree seeds, such as acorns, but will easily eat fungi, catkins, flowers, rosehips, shoots, bark and bulbs. They’ll even raid bird nests for eggs and young.

Named the Grey Squirrel, it’s easy to believe they’re totally grey in colour. In fact, they’re not. Many have a slight russet tone to their fur, as well as white underparts – leading to them being mistaken for red squirrels.

#7: Grey squirrels are bigger than native red ones