In 1856, the (then) 170-acre Grime’s Dyke site was bought by renowned artist, Frederick Goodall.

The original Grime’s Dyke earthwork ran across the site, so the fosse was dammed at one end, to make an ornamental stretch of water in the grounds. He’d purchased the Harrow Weald land from the Marquis of Abercorn, but was unable to start building a property on it until the existing lease had expired. The timber and brick building was finally completed in 1872.

The building of his house on the Grime’s Dyke site coincided with his second marriage to lawyer Thomas William Tarry’s daughter, 22-year-old Alice. 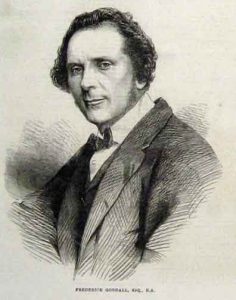 Born on September 17th1822, Goodall was the son of a renowned steel line engraver and he came from a family of watercolour artists – with two of his brothers and one sister, exhibiting at the Royal Academy too.

Goodall painted his first commission (a set of six watercolour paintings for the Rotherhithe Tunnel) for Isambard Brunel when he was only 16. He’d become friends with Tom Page, the engineer working on the Rotherhithe Tunnel, and a subsequent chance encounter with Brunel landed him the commission. Four of these paintings were subsequently exhibited in the Royal Academy. Goodall’s’ career blossomed. He went on to win a Society of Arts silver medal, for his first oil painting and went on to travel, exhibit and sell his paintings in France, Ireland and Egypt. He was elected Associate of the Royal Academy in 1852 and became a full member 1863.

By now, Goodall was regularly earning £10,000 a year, an income that afforded him company with the likes of Charles Dickens and the Prince of Wales – he was also able to commission architect Norman Shaw to design his Grime’s Dyke property.

The design & build of The Grim’s Dyke manor house

The property consisted of immensely high chimneys, had fantastic gables, was surrounded by conifers and exotic shrubs, and the ornamental stretch of water became home to a present from his wealthy neighbour and patron, Mr Thomas Blackwell (of Crosse & Blackwell) – a statue of Charles the 2nd, from Soho Square.

At Shaw’s request, Goodall changed the name of his estate to the friendlier-sounding Graeme’s Dyke. It became home to Goodall, his wife, their two children and both a herd of Egyptian goats and flock of Egyptian sheep – these lay around on piles of straw, being fed dates by the Goodall family’s visitors!

Whilst at Graeme’s Dyke, Goodall painted 30 large biblical scenes for Blackwell, all housed in a specially built gallery in his home. Goodall reluctantly sold Graeme’s Dyke to banker Mr Heriot, who subsequently sold it to W.S. Gilbert in 1890. 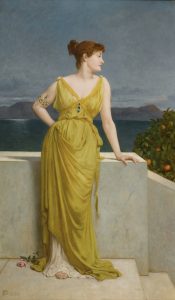 In all, Goodall had a total of 170 painting displayed at the Royal Academy over his 46-year career and one of his final works, ‘The Snake Charmer’ was sent to Marlborough House, for His Royal Highness, the Prince of Wales, to inspect.

Sadly, Goodall’s income dwindled in his later years and he died bankrupt, in 1904.