This week we are joined by Guest Blogger and Artistic Director of Grim’s Dyke Opera, Victoria Whittaker. 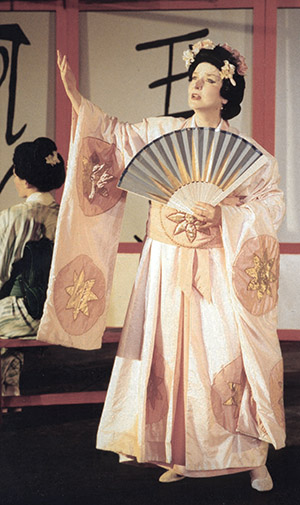 The performances offer a unique opportunity to audiences, who are able to watch a full costumed G&S Opera in Gilbert’s wonderful Music Room, combined with a delicious dining experience. GDO now performs a full programme of thirteen operas, with renowned principals and supported by the Grim’s Dyke Opera Chorus under the baton of Steve Kenna.

In addition to Gilbert and Sullivan, the Company performs a full range of Opera and Operetta. The soloists are equally at home with the works of Puccini, Verdi and Mozart and can tailor the repertoire to accommodate all types of entertainment requirements.

What the Press Say..

Mary Gold.  The Times
“Grim’s Dyke Opera Company — odd name, but a great team. Ann-Louise Straker, the charismatic soprano playing Mabel, managed some difficult notes effortlessly and with such clear tones that she brought tears to our eyes; Stephen Brown, the boyish tenor playing Frederic, had a voice that can only be described as transcendental. Joy Rayner (Mezzo Soprano) was wonderful and we liked the lovely, smiley ladies and gents of the opera chorus. A glorious romp and faultless stuff, and all without microphones if you please.”

Grelle White.  Watford Observer
“The Grim’s Dyke Opera Company is clearly more than just accomplished opera singers. They are experienced Gilbert and Sullivan devotees. Every line and every word could be clearly heard.”

Emma Andrew.  Limited Edition
“Baritone Clive Bebee as the aesthetic poet, Reginald Bunthorne stole the show with his rich, chocolatey tones and comic performance and his hugely entertaining duet with Sylvia Clarke as Lady Jane was the real highlight of Act II. When the full cast assembled on stage for the finale, it’s a sight and sound to behold, as they almost raise the roof in a magnificent chorus that sounds as if there are twice as many of them. All in all it was a magnificent evening.” 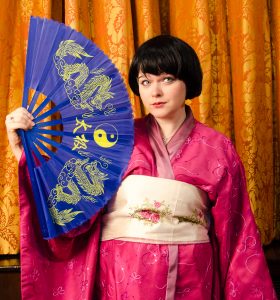 Victoria began her career as a child actress playing Lucy in The Lion, the Witch and the Wardrobe, The Good Fairy in The Slipper and The Rose, Demetrius in A Midsummer Night’s Dream. Whilst studying at Eltham College, she starred in Tommy the rock Opera and played the Beggar Woman in Lorca’s Blood Wedding. She was awarded a scholarship to study at the Royal Academy of Music and gained a Bachelor of Music degree.

Her performing roles include Amor in Orfeo ed Euridice, Rose Maybud in Ruddigore, Edith in Pirates of Penzance, Celia in Iolanthe & Kate in Yeoman of the Guard. On the concert platform Victoria has performed at St Clement Danes in the Strand and the Royal Albert Hall.

Take a look at the Entertainment Programme for the Grim’s Dyke Hotel including the Gilbert & Sullivan Opera.

Book tickets to an Opera by calling 020 8385 3100 or email reservations@grimsdyke.com