The Mikado (or The Town of Titipu) was Gilbert & Sullivan’s ninth collaboration. Set in Japan, the story is based around the chief executioner, who has a tender heart that is in direct opposition to that needed for his official duties. The Mikado has an impressive operatic history – but this Savoy Opera nearly didn’t happen at all.

Earning its place in the operatic history books

The Mikado is one of the most frequently performed Savoy Opera – not only that, but it’s also one of the most played musical theatre pieces in history. It’s especially popular with both amateur and school productions,

Opened in London, on 14th March 1885, The Mikado has certainly earnt its place in the operatic history books. At 672 performances, it had the second longest run of any musical theatre work AND it had one of the longest runs of ANY theatre piece at that time.

The tensions behind The Mikado

Gilbert desperately wanted to use his new libretto, in which people fell in love after eating a magic lozenge, however Sullivan was tired of supernatural-based plots. He wanted something based on human interest, something that was humorous both in words and setting, something light-hearted and tender – and both men weren’t going to back down.

The stalemate couldn’t have come at a worse time. Richard D’Oyly Carte had given them contractual notice on 22nd March 1884, that a new play was needed within six months. Gilbert tried to rewrite his existing plot, but Sullivan was not going to back down – so it was down to Gilbert to finally relent.

He wrote to Sullivan on 8th May 1884: ‘am I to understand that if I construct another plot in which no supernatural element occurs, you will undertake to set it?’ Sullivan agreed, and Gilbert sent a sketch of a plot over to him – The Mikado.

The Mikado is born 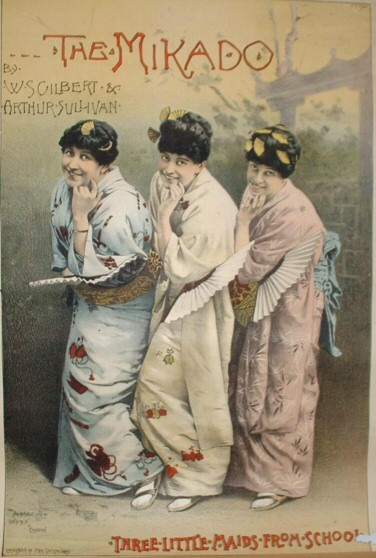 It took a further ten months for The Mikado to reach the stage. Gilbert had gotten his inspiration for the story from the Japanese executioner’s sword hanging on the wall in his library – and the sword was carried by Mr. Grossmith at his entrance in the first act of The Mikado.

Sullivan dined with Gilbert at Grim’s Dyke on 20th November to be shown a version of Act 1. By January the opera sill wasn’t complete, but they had enough to start rehearsals.

Gilbert chose Japan as his setting for the opera as he thought it would be popular with the London audience – it opened itself up to beautiful scenery and costume. However, he couldn’t have anticipated the opening of a Japanese Exhibition in Knightsbridge in January 1885!

Mr Tannaker Buhicrosan bought over 100 Japanese people to populate a constructed ‘Japanese Village’ – and the exhibition would be invaluable to Gilbert. Not only did they advertise for each other, Gilbert used it to ensure his never-ending quest for accuracy.

He enlisted the help of a young Japanese lady to teach Miss Sybil Grey, Miss Braham and Miss Jessie Bond a graceful Japanese dance to be included in the play.

Opening night for The Mikado

Opening night for The Mikado was Saturday March 14th, 1885. During the last dress rehearsal Gilbert had decided to cut the Mikado’s song – even though Mr Temple had sung and acted well. He was met with protests from both cast, chorus and the few pressmen in attendance and was forced to change his mind – and the song stayed for the opening performance in front of the usual fashionable crowd.

Gilbert himself didn’t watch the opening night – he always left the theatre as the curtain rose on the first act. He firmly believed his part was finished once the last rehearsal had come to an end – but he always ensured he was back in the house to hear the cheers at the end AND to take his bow alongside Sullivan!

Gilbert and Sullivan’s operas are frequently performed at The Grim’s Dyke Hotel. Why not take a look at our entertainment page on our website and see what operas are on our program for 2015? You can access it by clicking here.