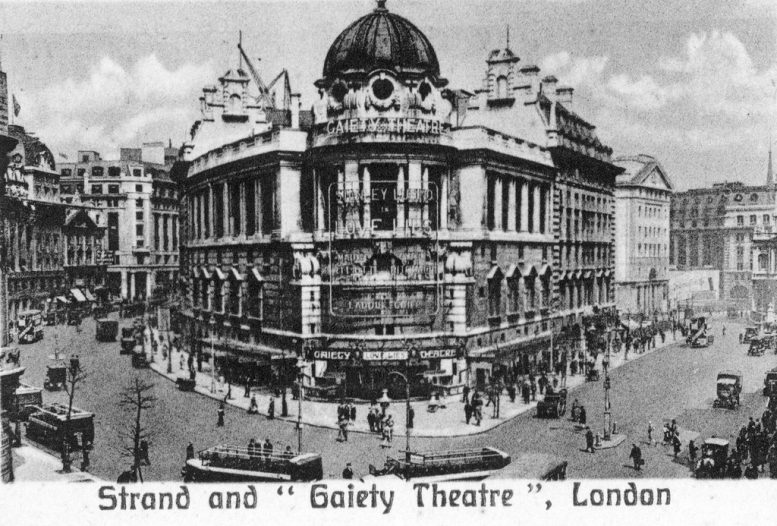 The Gaiety Theatre was built in 1864, on the former site of the Lyceum Theatre. Originally established as the Strand Musick Hall, it took four years to become known as the Gaiety Theatre.

Under the management of John Hollingshead, the Gaiety Theatre was known for musical burlesque, pantomime and operetta performances. It was also synonymous with being a major influence in the development of modern musical comedies – including early works, such as Robert The Devil by W.S. Gilbert.

Hollingshead and the Gaiety Theatre, saw many a premiere too – including the initial collaboration of W.S. Gilbert and Arthur Sullivan; Thespis.

Hollingshead’s final production at the Gaiety Theatre was Little Jack Shepherd. It was jointly produced with his successor, George Edwardes.

Edwardes ran an empire of theatres for 30 years, including the Gaiety, Daly’s Theatre and the Adelphi. He brought a new era in musical theatre and introduced the ‘Gaiety Girls’ to the world – a group of well-behaved, fashionable and elegant young women, who were his glamourous dancers – they also became the symbol of ideal womanhood.

This led to the production of what became known as the ‘girl’ musicals. These musicals packed the Gaiety Theatre for the next two decades – and also meant the girls themselves, became hot property. Wealthy gentlemen would wait for the girls by the stage doors, hoping for a chance to take them to dinner, and many went on to marry into society and nobility.

In an effort to balance the popularity of the ‘girl’ musicals, Edwardes also produced boy-themed musicals, many of which became popular, leading to British and international tours.

The Gaiety Theatre introduced a new style of theatre – the Edwardian musical comedy. It Unlike other theatres of the time, The proprietors decided to ban smoking and drinking within the hall, opting instead, to accommodate these activities in the adjacent saloons.

It also used a novel gas lighting system that used mirrors and prisms, in order to create soft lighting and using the exhaust from the heat created, to draw fresh air into the building.

The demise of the Gaiety

Edwardes died in 1915, leaving his estate in debt. The Gaiety Theatre was left to Robert Evett, a former leading tenor of the D’Oyly Carte Opera Company. By 1938 the Gaiety was in dire need of refurbishment, but wasn’t considered financially viable. It stood empty during the second World War, sustaining further damage during the resulting air raids, before being sold in 1946. The plan was to restore it; however, the damage was too severe. It was finally demolished in 1956.