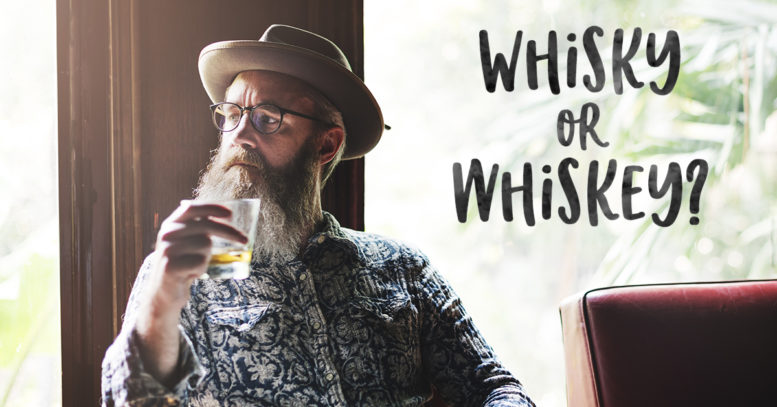 It’s the topic many a whisky-lover gets worked up about. Is it correct to spell whisky with or without an ‘e’? And more to the point, does it really matter? Unfortunately, it isn’t a simple yes or no answer – both spellings are correct!

The introduction of a new spelling – for the Irish distillers

Until the late 19th Century, all whisky distilleries spelt whisky without the ‘e’. At the time Irish distilleries were supplying about 70% of the world’s whisky. But with the 1860s Spirits Act being passed by the Gladstone government, Irish whiskey distillers needed a way to differentiate their whiskey from those of the Scottish distillers – and so the ‘e’ was introduced into the Irish distiller’s labels.

America followed suit – but not everyone agreed

The Irish Whiskey distillers initially supplied 70% of the world’s whisky. However, when they first started promoting their whiskey to the American market in the 1800s, they decided to start the ‘with an e’ option, to help differentiate their whiskey from the new Scottish versions that were starting to take hold. The American distilleries soon adopted this spelling of whiskey and it became the norm across America.
Canada, India and Japan preferred to follow the Scotch whisky labelling, opting to omit the ‘e’. For Japan, in particular, this decision was taken to pay homage to its Scottish cousin.

It isn’t just the spelling that makes the whisky different

One of the biggest difference is in the use of grain. Scottish distillers prefer to use malted barley as their grain of choice. However, Irish whiskey is often produced with barley, but it’s often a mixture of malted and unmalted barley, whilst the American distillers often use various grains, including corn, rye or wheat.

As a general rule of thumb, Irish Whiskey is distilled three times. American whiskey and its Scottish counterparts both prefer to distill theirs twice.

The use of peat

Generally, the use of peat is limited to Scotch whisky. Peat is used to dry the malted barley, making it ready for milling and mashing. It is the peat that gives Scotch whisky its full-flavoured smokiness. Irish and American whiskey has less of a smoky taste, as they prefer to use wood or other fuels during this process.

Finally, it’s not just the countries and their processes that dictate your whisky choices – there’s also the different blends to consider! Here’s a brief breakdown of how they differ:

No matter what the country of origin, the distillation process used or the blending options, whisky still seems to be one of the world’s most popular drinks.

And let’s not forget, you can also have it neat with ice, add a dash of water, or even use it as a mixer…If you’re whisky lover and would like to try out the different assorted whiskies, you’ll not want to miss out on our annual Harrow Whisky Festival! This year it’s being held on the 10th and 11th January 2020 and tickets are available now. Head on over to the website for further details and to book your place!