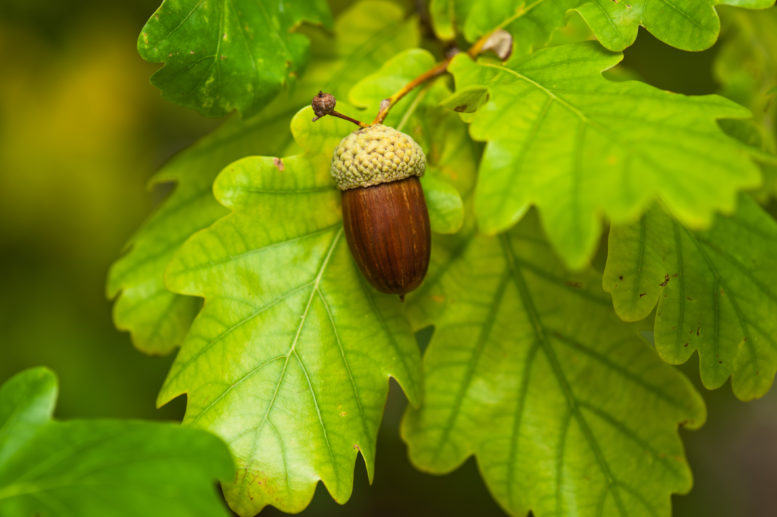 When it comes to instantly recognisable trees, the English oak has to be top of the tree. It’s one of the most common tree species in the UK and possibly one of the best-loved too.

So, what makes the oak such a special tree? Here’s our compilation of the top ten facts about this wonderful tree.

#1: It doesn’t produce acorns until it’s at least 40 years old!
In fact, the most abundant time for an oak tree, in terms of acorn production, is when the tree is between 80 – 120 years old.

#2: Each tree can produce an average of 90,000 acorns a year
That’s several million acorns in each trees lifetime! Unfortunately, most don’t ever germinate, as they’re a rich food source for many creatures – including squirrels, mice, jays and badgers.

#3: Oak trees shorten with age, to extend their lifespan
An oak tree does most of its growth in its youth – rapidly growing until its about 120 years old. It then slows down, to preserve itself. Blenheim Palace is home to some of the oldest oak trees – with several being dated to be approximately 1,046 years old.

#4: It’s home to more animals than any other European tree
Oak trees are home to approximately 30 species of bird, 45 different bugs and over 200 different species of moth.

#5: A mature oak can reach a height of 40 metres
As the tree matures, its trunk hollows out, making accurate dating difficult. It can also get a wide around the middle – the Blenheim Palace trees have a girth of about 10 metres!

#6: The oak tree has long been considered sacred
The Greek, Roman and Celtic Gods, such as Zeus, Jupiter and Dagda honoured the oak tree. It was considered to be the tallest living feature in the landscape – making it a target for lightning strikes.

#7: Royalty has a long association with the oak tree
King Charles II hid in an oak tree at Boscobel House, to throw off his pursuers. Roman Emperors and Kings alike, adorned themselves with oak leave crowns, to symbolise victory, strength and survival.

#8: Important part of our culture
In Cromwell’s time, couples were married under the oak tree. It was also what the traditional festive yule log was cut from, and it also appeared on the 1987 minted pound coin.

#9: It’s one of the hardest and most durable timbers on the planet
It was a prized timber among ship builders and is still used to make furniture, flooring and wine barrels today. However, it takes 150 years before it’s ready to use in construction, making it scarce and expensive – that’s why pine and other soft woods, are used for furniture.

#10: It’s toxic to horses and cattle
Actually, it’s the acorns that are poisonous to horses and cattle. The Tannic acid in the leaves is also poisonous to horses, if consumed excessively. The hairs of the oak processionary moth (a non-native pest that damages the leaves and increases the oak’s susceptibility to other diseases), are also a risk to human health. They can cause itching and respiratory problems if inhaled.