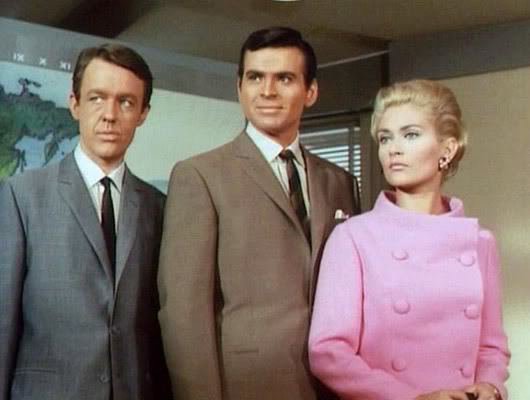 British adventure TV series The Champions may only have had 30 episodes broadcast, but it was one of the many programmes that used Grim’s Dyke as a filming location. It starred Stuart Damon, Alexandra Bastedo and William Gaunt as agents for a fictional United Nations Law Enforcement organisation called Nemesis, based in Geneva.

The premise of the show was that the heroes had perfected human abilities, meaning they also gained extrasensory powers such as telepathy, precognition and enhanced intellectual and physical abilities. These abilities were as a result of a plane crash in the Himalayas – which saw them being rescued by an enhanced Tibetan civilisation. As with other popular shows of the 1960’s and 70’s, The Champions focused on threats to world peace – usually as a consequence of fascist regimes, Nazis, South American countries and Chinese militants.

The Champions was a crossover adventure series, crossing various TV genres, including espionage, science fiction, detective and the occult. It was released on 25th September 1968 through to 30th April 1969. Created by Dennis Spooner, it was produced by Monty Berman – who’d co-produced The Saint, Gideon’s Way and also went on to produce Department S and Randall and Hopkirk (Deceased). All episodes were also written by various veteran British spy series writers – many of which Monty Berman continued to work with on subsequent TV series.

Budget restraints meant production sets were frequently reused. Out of 30 episodes, two used Grim’s Dyke as a filming location. Episodes 21 (The Body Snatchers) and 28 (The Final Countdown). There were also three episodes filmed in the Arctic, as well as three on a submarine.

Although The Champions TV series had a relatively short lifespan, it was shown in the UK, America and Italy. It was subsequently re-run three times in the UK, as well as being regularly repeated on ITV4 until 2011 – with a DVD set of the series being made available in both the UK and North America as a result.