In 1919, two young girls captured the imagination of the public, along with spiritualists and theosophical societies alike, with their photographs of fairies. Taken at the end of their garden, Elsie Wright and Francis Griffiths had captured the first ever photographic evidence that fairies existed – and the Cottingley Fairies were born. 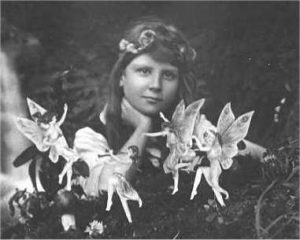 The Cottingley Fairies were a set of five photographs taken by cousins, Elsie Wright (aged 16) and her cousin, Francis Griffiths (aged 9). Elsie used her father’s Midg quarter-plate camera to create the first two images in 1917 – but they didn’t become public until her mother took them to a Theosophical Society talk on fairies.

Leading member of the society, Edward Gardner, recognised their potential and sent both the prints and the original plate-glass negatives to photography expert Harold Snelling. Snelling stated they were genuine and unfaked – authenticating them for Gardner. Gardner then produced new negatives, so he could print off copies to sell at his talks, around the UK.

Spiritualist and writer, Sir Arthur Conan Doyle learned of the photos. He wrote to Elsie’s father, gaining permission to use them for his commissioned piece in the 1920 Christmas edition of The Strand magazine – but Arthur Wright refused to take money for them. Both Gardner and Doyle sought the advice of photographic company Kodak – who agreed they showed no signs of being faked, but refused to issue a certificate of authenticity. 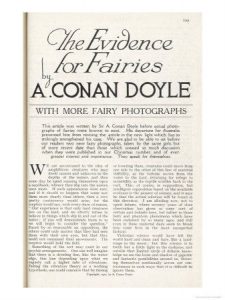 In July 1920 Gardner returned to Cottingley, armed with two Kodak Cameo cameras and 24 secretly marked plates. Francis was invited to stay with the Wrights’ for the summer holiday and he gave each of the girls a camera to keep, with the aim of getting them to tice the fairies out. It wasn’t until August 19th that the final three photographs were taken – thanks to an upturn in the weather. Gardner packed the plates in cotton wool, returned to London and sent a telegram to Doyle, informing him of the good news.

Doyle wanted the world to recognise the existence of fairies – in part, to jolt their minds to the glamour and mystery of life, and to accept the spiritual message around psychic phenomena. However, it received mixed reviews from the public and prominent public figures. 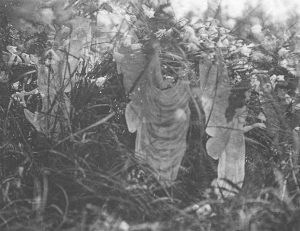 Gardner made a final visit to Cottingley in August, 1921 – but this time he was accompanied by the clairvoyant Geoffrey Hodson. There were no more photographs taken, as the girls didn’t see any fairies – but Hodson saw them everywhere.

Interest in the Cottingley Fairies subsided in 1921. In 1966 a Daily Express reporter tracked down Elsie – and she admitted they might have been a figment of her imagination, but that she’d somehow captured images of her thoughts. This lead to an increase in interest again. In 1971 the BBC programme ‘Nationwide’ investigated the case, and the girls were interviewed for a Yorkshire Television programme – each time the girls stuck to their story.

It wasn’t until 1983, in an article published in ‘The Unexplained’ magazine, that the girls finally admitted the photographs were fake. In an 1985 interview for Yorkshire Televisions ‘Arthur C. Clarke’s World of Strange Powers’ the girls admitted they’d not wanted to confirm what they’d done, due to the embarrassment of fooling a man as great as Sir Arthur Conan Doyle. They’d used cardboard figures, secured with hatpins, disposing of their props in the beck, once the photographs had been taken. 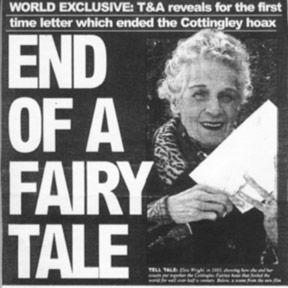 However, in a final twist, the girls both still maintained they’d seen real fairies, but couldn’t agree on whether the final photograph was real or not. Elsie maintained it was, whilst Francis insisted it wasn’t – and they both were insistent that they’d taken that final image.

In 1998 Gardner sold his Cottingley material to the National Museum of Film, Photography and Television in Bradford (now the National Media Museum). It included prints of the photographs, two cameras, Elsie’s watercolour paintings of fairies and her nine-page letter, admitting the hoax.