The Garrick Theatre first opened its doors on 24th April 1889, with an Arthur Wing Pinero play, The Profiligate. Situated on Charing Cross Road, The Garrick was renowned English librettist, dramatist, poet and illustrator W.S. Gilbert’s legacy (as financier for the theatre’s build). 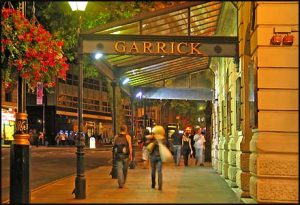 Designed by Walter Emden, the theatre nearly didn’t happen, after difficult site planning, due to an underground river being discovered during excavation. This led to consultant C.J. Phipps being bought in, to consult with Emden – a relationship that was, by all accounts, an uneasy one.

the 140-foot-long frontage was constructed from Portland and Bath stone. Inside, the auditorium comprised four levels – Stalls and Pit, Dress Circle, Upper Circle, and gallery. The balcony fronts were adorned with cupids holding laurel-decked shields, each with a different author’s name on them. The ceilings were ornately decorated, styled in an Italian renaissance style, whilst the floors comprised of mosaic in the vestibule, marquetry in the saloons and entrance hall, surrounded by dados of polished walnut panels. The upper part of the walls are divided by marble pillars, with mirrors and relief decorations. The overall colour scheme is white, gold and cherry red – with cherry red silk curtains and Japanese paper of cherry red and gold, adorning the pit walls.

The whole of the gold-leaf-decorated auditorium was heated by hot water on the Canadian system; introduced to England by Mr Cowan. It also had electrical lighting and the latest fire appliances, including a fireproof roof over the stage, complete with large exhausts and a total of 10 exits. Due to the deep excavations of the building, the main entrance brings you straight through the vestibules and onto the dress circle level. Here patrons were greeted by a bust of Shakespeare and an oil painted copy of the celebrated portrait of David Garrick, whom the theatre is named after.  Patrons were also happy to see conveniences situated at every part of the house and the implementation of the newest seating style – seats that lift up, have armrests and space for hat, coat, umbrella and program! There were 800 seats in total, although its overall capacity was quoted as nearer 1,250.

The Garrick is now one of five playhouses owned by Nimax Theatres Ltd and is mostly associated with comedies and comedy-drama. It still has many of its original features and was given Grade II English Heritage status in 1960. The old river, discovered during excavation, has long since been replaced – by the Northern Line of the underground.