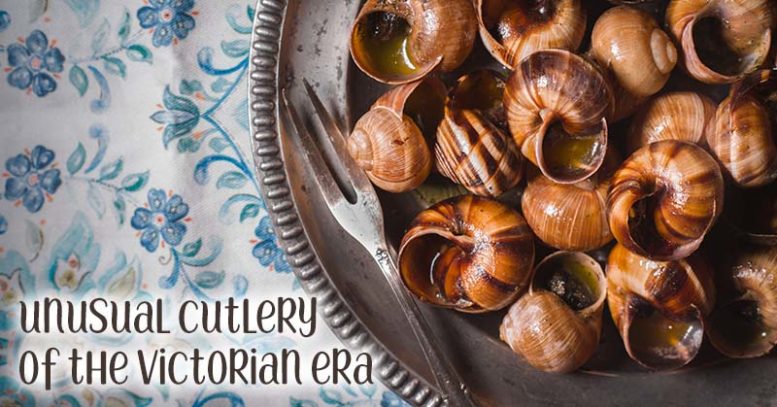 We all know that the Victorian era was an age of incredible ingenuity. The industrial revolution was changing the way in which materials were produced. The first photographs were taken. The world got its first taste of ice cream and people were, for the first time, getting on their bikes – although they were called ‘velocipedes’ at first. The Victorian era gave birth to a whole host of ornate, precision engineered and, in some cases, utterly weird inventions from the penny farthing to the postage stamp.

In this era of incredible pomp and ceremony, the industrious spirit of Victorian England could even be seen on the dinner table. Victorian place setting was famously elaborate and could utilise up to 24 pieces of cutlery in a single meal. Let’s take a look at some pieces of incredible cutlery from the Victorian era.

Yes. Scissors, just for grapes. Grape scissors were a common sight at the Victorian dinner table. In these incredibly proper times, it was considered unspeakable to use your hands when eating anything, even this humble fruit. [Text Wrapping Break][Text Wrapping Break]These ornate scissors were made from silver to prevent tarnishing and were often etched with images of grapes or other fruits. They were used to cut into the bunch and select the grapes the diner wanted.

Today snails are little more than an inconvenience in the garden. But for Victorian families they were a quick and easy source of protein. They were a popular snack food particularly among the lower classes and they were even believed by some to have medicinal properties. Many believed that raw snails (or ‘wall fish’) could cure tuberculosis when eaten raw. [Text Wrapping Break][Text Wrapping Break]Snails where the great leveller, eaten by rich and poor alike. Although wealthy households ate them with snail forks; ornate two-pronged forks which were slender enough to skewer the meat and lift it out of the shell.

The Victorians would blanche if they saw our wasteful contemporary habits! Nothing went to waste in those days, especially not meat. In fact, they even used slender, elongated scoops to remove the marrow from the bones of roasted meats.

Well, it wouldn’t do in this era of decorum, to go sucking and slurping it out, could it?

Victorian sugar didn’t come in granular form, nor in tidy little cubes. It was bought by the loaf and the lady of the house would cut it to size using little nips (which looked like a cross between kitchen tongs and nail scissors). These would be used to cut the sugar into smaller and more manageable chunks.

Those Victorians weren’t ones to sacrifice form for function. Perhaps nothing encapsulates the ornate nature of Victorian cutlery like the caddy spoon.

These had a very simple function – to measure tea leaves for the pot. However, they were rendered in such exquisite and ornate shapes, decorated beautifully with the shape of flowers, crests or local scenes.

As you can see, the average Victorian dinner was a masterclass in both artistry and engineering prowess – although, we’d hate to be the ones that had to do the washing up afterwards!