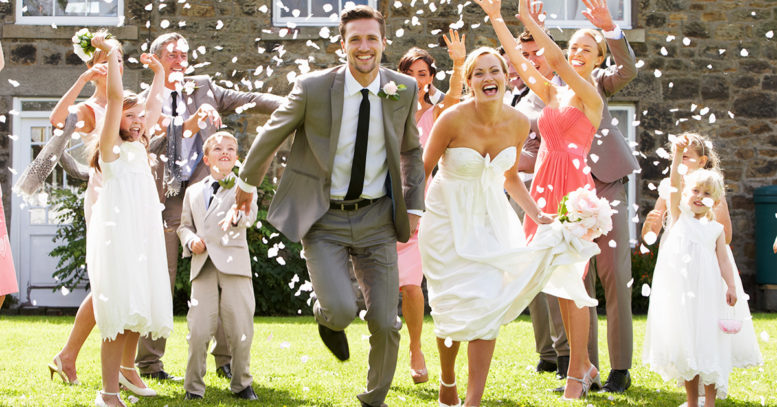 There’s something special about confetti blowing in the breeze at a wedding. Confetti has long been a tradition at weddings and other celebratory occasions, but when did it start and why the tradition?

Celebrating the union of a happy couple

As early as the 14th Century, the most popular things thrown at celebratory events were flowers, rice, coins, seeds, fruit, candy – and even mud and eggs! These were thrown over the couple to bestow them with prosperity and fertility. Obviously, some of these items must have been painful and even dress-ruining, for blushing brides – so it’s understandable that the Victorians popularised paper confetti in the 19th Century!

The word ‘confetti’ originates from Italy. It’s related to the Italian confectionary of the same name. These small sweets were also known as ‘drageé; almonds with a hard sugar coating. Interestedly, you’ll often find small tulle bags filled with sugar covered almonds at weddings still today – but they’re given as favours to the guests, as a means of thanking them for sharing the happy couples’ big day.

Confetti is often seen as small pieces of paper, but it can also be Mylar (a type of polyester), metallic materials and natural or freeze-dried rose petals. Unlike glitter, confetti pieces are larger than 1mm and aren’t universally shiny. Confetti is available in a variety of colours and consists of either shredded paper or ‘chads’ – the fragments created when holes are punched in paper. The more elaborate chads are shaped to give them tumble wings, causing them to flutter as they fall to the ground. 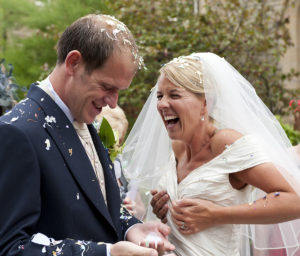 It isn’t just limited to throwing over the happy couple. Modern use of confetti includes sprinkling it around the tables at parties and events, adding it into greeting card envelopes and even firing it from canons.
Venues often don’t love confetti as much as we do!

However, our love of confetti isn’t something that many venues and churches share. Whichever you use, it inevitably means an enormous amount of extra cleaning is required by venue staff. This has led to many venues stipulating the use of only biodegradable of natural confetti. Many are banning its use inside altogether – with many churches even going as far as discouraging it’s use outside too. This has led to many wedding attendees now opting to blow soap bubbles at the happy couple instead.