Drawing of Priscilla German Reed in both the parts she played in an 1857 double bill: the title roles in The Flower-boy and The Scotch Fisher-girl

In the 1870’s the theatres of London were full of sexually orientated burlesque shows and badly adapted French operettas. Theatre had fallen into disrepute and wasn’t seen as a suitable place for any underage person or those with decent morals. However, cultural change was underway, when W.S. Gilbert teamed up with husband and wife team, Thomas & Pricilla German Reed.

They teamed up in 1869, early in Gilbert’s writing career and, for the next six years Gilbert joined the Reed’s as leading figures in the quest for theatrical reform. German Reed’s Intimate theatre allowed Gilbert to develop his own personal style of writing and to have control of his production, direction and stage management of his musical entertainments, fuelling his goal to provide refined and clean entertainment. 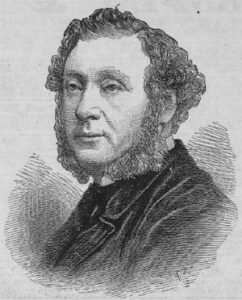 Thomas and Pricilla had formed German Reed Entertainment in 1855 and provided family-friendly musical entertainment for the next forty years. Thomas, an organist, musical director and performer, often created the music, as well as taking on acting roles – his wife, Pricilla, was a noted singer, actress and dancer, so was known to take an active part in the productions too.

The Gallery of Illustration

The German Reed’s presented short comic opera productions. They were aware anything related to the theatre was seen in a bad light, so they chose to reword their productions as ‘entertainments’ or ‘illustrations’ and their theatre as a ‘gallery of illustration’. They produced their first gathering in the spring of 1855.

By the time newcomer W.S. Gilbert joined the Reed’s in 1869, the Reed’s were already seen as the leading figures in theatrical reform. Gilbert spent the next 6 years joining them on that same quest for reform.

The beginning careers of W.S. Gilbert and Arthur Sullivan

The Reed’s were known for given talented newcomers a chance to break into the world of theatre – and it’s interesting to note that this included Arthur Sullivan, with his first full-length professional production, The Contrabandista being shown in 1867. This production was a collaboration between Sullivan and F.C. Burnand – Reed commissioned it to open his newly leased theatre, St Georges Opera House.

Two years later, the Reed’s showed W.S. Gilbert’s first ‘musical piece’ – No Cards. This was written by Gilbert, with music composed and arranged by Reed. It was swiftly followed in the same year, by Gilbert’s first big hit, Ages Ago – written by Gilbert and music by Frederic Clay. It was the start of a 7-year collaboration between Gilbert and Clay and it was also during rehearsals for this piece, that Clay introduced Gilbert to his friend – Arthur Sullivan.

Some elements of the entertainments Gilbert created during his time with the Reeds, would provide the creative spark for his later works, including the Savoy Operas. Throughout his career, Gilbert may have pushed the limits of satire, but his work illustrated his strong desire to clean up British theatre and to produce comedies that were tasteful, refined and suitable for younger, innocent theatregoers – he was finally able to state the achievement of that goal in 1885.