Sir William Schwenck Gilbert, most known for his ‘Savoy Operas’ in Victorian England, also had a deep love of animals, particularly his various pet lemurs. The English writer, composer, comedian, actor and singer George Grossmith, is stated as once overhearing Gilbert saying “Deer-stalking would be a very fine sport – if only the deer had guns.”

Once the decision to retire had been made, Gilbert continued to stage-manage revivals at the Savoy. The rest of his time was dedicated to travel and relaxation at Grim’s Dyke, surrounded by those closest to him, including his wife, Lucy and their young charge Nancy, whom they took in and raised as their unofficial adopted daughter.

Nancy took special care of the many animals that were resident at Grym’s Dyke, including the rather petulant lemur, Job. Job was the Gilbert’s much-loved pet and used to getting his own way – even when caught with his muzzle in the sugar basin (causing all sugar basins to be banned from the dining room)!

When Job died (reportedly after pining for the Gilberts whilst they were on holiday) he was replaced by two Madagascan lemurs – Adam and Eve – and in 1904 they gave birth to a baby lemur, that Gilbert called Paul. 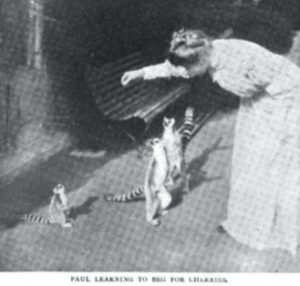 This made Paul special, as he was the first ever ring-tailed lemur to be born and bred in captivity in the UK. He was tiny, his hands being only an inch long, and he was smaller than the other ring-tailed lemurs, except for his tail that seemed extraordinarily long.

Paul became a fast favourite with Gilbert, who never failed to be amused by Paul’s mischievous streak, as he sat perched on Gilbert’s shoulders. He’d twist Gilbert’s moustache to turn his head and catch his attention. The Gilbert’s gave up trying to cage Paul at night, so he slept on the top of the wardrobe at first, but then took to sleeping in a basket with his favourite Persian cat.

Paul remained with them at all times, good natured and cheery, playing with the other animals and sleeping until it was time to dress for dinner. Then he would jump on Gilbert’s shoulders whilst he dressed, shifting his hands and feet to stay in place whilst Sir William dressed, before going to dinner and eating his fruit and lettuce off the napkin on the dining room floor.

He was a truly irresistible lemur and very inquisitive. He’d watch the food being served, from his position on the back of someone’s chair. If something took his fancy, he’d lean around and softly kiss you on the cheek – followed by a gentle caress, if his overture received no response. Paul was known to daintily pick his favourite selection from your plate, if it took a particular fancy.

A friendship that lasts 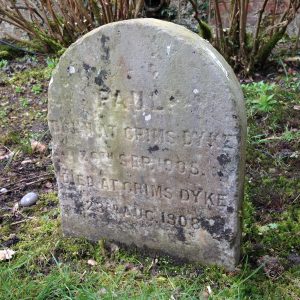 Although very healthy, one day Paul ate some Rowan berries, causing him to have peritonitis. Everything possible was done for him, but alas, after a few days illness he died on August 23rd 1908, aged just two years and eleven months.

He was buried in the grounds of Grym’s Dyke, so he could be near his beloved family – and you can still see his tombs stone there today – nestled next to the croquet lawn and in clear view from the Drawing Room.

Keeping the history of The Grim’s Dyke alive

Whilst we don’t keep Ring-Tailed Lemurs at The Grim’s Dyke any more, we do endeavour to keep the memory of W.S.Gilbert alive through regular performances and concerts performed by The Grim’s Dyke Opera. To see a list of scheduled operas please visit our Entertainments Section.