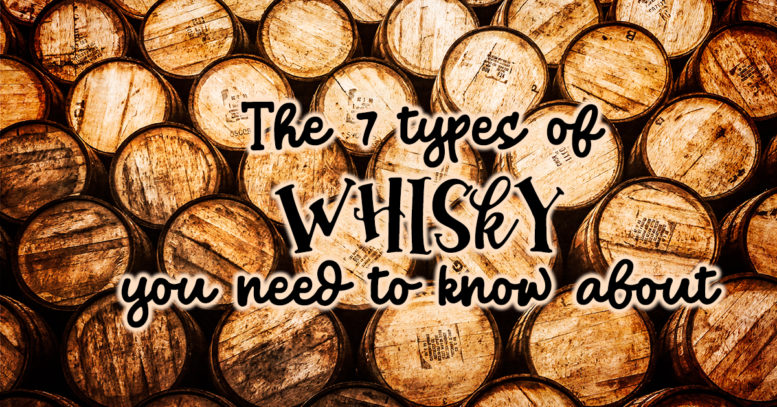 Whisky, loved and enjoyed by many, is essentially a hop-less beer made from either corn, rye, wheat, barley or oats. But did you know, there are essentially 7 different types of whisky? Each of those different grains used to produce it has a different sugar content and, the higher the sugar content, the sweeter the whisky will taste. No matter which grain is used, whisky will always be at least 40% alcohol.

Scotch whisky is aged in oak casks for at least 3 years. It is usually made from 100% malted barley, but can also use other grains including corn and wheat. Scotch whisky goes through two distillations, in traditional small pot stills. It has a complex taste, often referred to as earthy and smokey, but this can vary depending on whereabouts in the region it was produced. It is also subdivided into 5 categories – single malt, single grain, blended malt, blended grain, blended scotch – with single malt being seen as the most desirable.

Is aged for at least 3 years, inside oak casks. Like its Scotch counterparts, it too is distilled in traditional small pot stills but, unlike the Scotch whisky, the Irish distillers use little or no peat and distil their whiskey three times. Made from either a mash of malted barley or yeast-fermented grain mash, the barley is roasted over coal or gas, inside a kiln, before itis distilled and aged. Irish whiskey has a smoother finish.

Bourbon is an American whiskey that must be made from at least 51% corn and contain no additives. Bourbon is stored in new charred oak barrels. It has a reddish colour, due to the fermentation process taking place inside the charred oak casks. It also tastes sweeter, albeit a little smoky with a vanilla tone.

Another American whiskey, made from between 51-79% corn. Tennessee whiskey must be steeped in maple charcoal chunks before it’s placed inside the wooden casks (called the Lincoln county process). It tastes sweeter, smokier (even a little sooty), compared to bourbon.

Rye is a North American whiskey made from at least 41% mashed rye grain and aged in charred new oak barrels. This gives it a fruity, spicy taste. The ageing process takes two years, whilst the production process is open to interpretation by each of the Canadian distilleries.

Unlike American whiskey, Canadian whisky uses less rye – and often uses corn – making it taste lighter and sweeter than the American whiskey. It’s often aged for at least three years in virgin casks, although some are reused. Canadian whisky is usually created as two separate whiskies (the base whisky and the flavouring), before being combined to create the end product. It can also contain caramel and flavouring.

Japanese whisky is drier and smokier than the other whiskies in this article. It is made from peated or double malted barley and is available as single or blended malts. It is modelled on the Scotch whisky distillation process, but they use varying different size of still to vary the overall choice of taste. Japanese whisky offers traditional flavours such as peat, but also innovative elements, such as ageing in plum wine casks.

If you’re whisky lover and would like to try out the different assorted whiskies, you’ll not want to miss out on our annual Harrow Whisky Festival! This year it’s being held on the 10th and 11th January 2020 and tickets are available now. Head on over to the website for further details and to book your place.