The Avengers was a hugely successful ‘spy-fi’ British TV series that ran for 6 series (161 episodes) from 1962 to 1969. Featuring Patrick Macnee as the impeccably dressed British secret agent ‘John Steed’, he was seldom seen without his bowler hat, umbrella or feisty, assertive female assistant.

All change at The Avengers

Series 6 of The Avengers produced a significant turning point for the crew, cast and avid followers of the program. Producer John Bryce, was bought in to replace Brian Clemens and Albert Fennel, whilst a nation said goodbye to one of Steed’s most popular assistants – Emma Peel (portrayed by Diana Rigg).

Clemens and Fennel were quickly bought back, after Bryce’s first three completed episodes were screened to studio executives. However, he had successfully managed to replace Peel’s character with Agent 69 ‘Tara King’ (portrayed by his then-girlfriend, Linda Thorson).

The ‘Game’, Jigsaws and the Grim’s Dyke 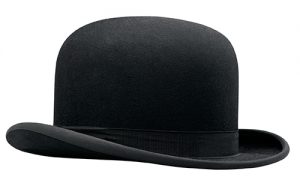 In King’s first episode, ‘Game’, clues to solve a series of murders are in the form of jigsaw pieces being left by the bodies. As the episode progresses, the jigsaw starts to take shape and form an image of Grim’s Dyke.

Following the kidnap of Agent King and, believing the building may be where they’re holding her, Steed goes to the Jigsaw Society to see if they can help identify the building. The Curator recalls it was the location of a jigsaw conventions (Jiggy Convention). Steed then drives to Grim’s Dyke in his vintage Rolls Royce Silver Shadow to rescue Agent King.

The main entrance where Steed parks his Rolls Royce, is where the Grim’s Dyke Hotel car is usually parked today.
Macnee revealed that, although the Rolls Royce in The Avengers looks beautiful, it wasn’t often that well maintained – with the cast and crew often having to push it into position!

Bryce wanted Agent King’s hair blonde, so Thorson’s brown hair was bleached. However, it badly damaged her hair and she had to wear a wig until her own hair grew back. You therefore don’t see Thorson’s real hair until episode 8.

Agents, kidnap and the Grim’s Dyke

This isn’t the first time the Grim’s Dyke has appeared in a TV series – and certainly isn’t the first time someone has been imprisoned at there either! Prior to The Avengers Agent King being held hostage there, another long-running British TV hero was too – ‘The Saint’ AKA Simon Templar.

This Robin Hood-type hero in a Saville Row, was imprisoned at Grim’s Dyke by members of an evil secret organisation known as S.W.O.R.D (season 6, episodes 11 and 12: ‘The Fiction Makers’). He manages to escape through the roof and then drives his car through the entrance gates.

It was both an honour and a privilege to have the Grim’s Dyke feature in both of these iconic British TV series. These feelings of gratitude continue to grow deeper, with every TV and film production we appear in – and it was a great honour to have played a small part in the career of such an iconic actor; Patrick Macnee.

All of the staff here at the Grim’s Dyke were deeply saddened to hear of his passing recently (June 25, 2015), at the age of 93 and our thoughts go out to his loved ones.

Thank you to Robin Cooke (who created the TV and Location Tours at The Grim’s Dyke) for his help with this article.