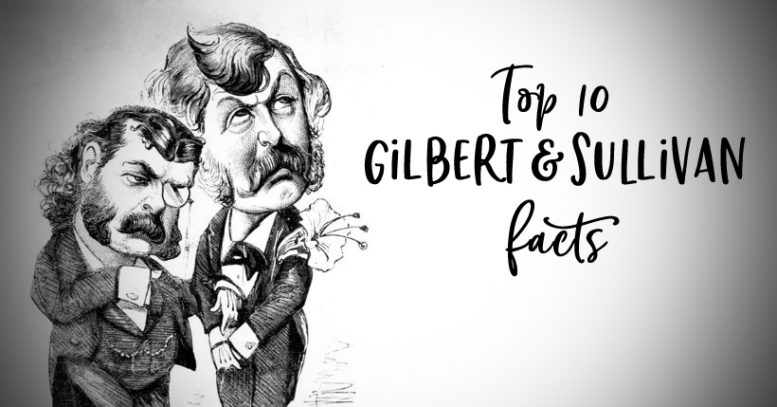 The theatrical partnership of Gilbert & Sullivan produced some of the most memorable comic operas. Although the partnership wasn’t always smooth sailing, it stayed as a form of friendship, right until the end. The partnership also had a massive impact on boosting the career of both men and helped shape the future of musical theatre.

Here are ten top facts that beautifully illustrate how important this friendship was to both men and the world of theatre and art.

During the 25 year partnership, 14 comic operas were produced. Although not every opera was a huge success, they all achieved decent levels of success – with the shortest run being ‘Thespis’ with 63 performances and the longest being ‘The Mikado’ with 672 performances.

Fact #2: It influenced the long-term direction of musical theatre

Fact #3: The theatre created for their works, still stands to this day

Richard D’Oyly Carte built the Savoy Theatre in London, to present their works. It was the first building to be lit entirely by electricity and was famous for premiering the Savoy Operas. It still stands to this day and continues to present operas, musicals, Shakespeare and non-musicals.

Fact #4: They actually had opposing personalities

Gilbert was confrontational and thin-skinned and often poked fun of the wealthy and powerful. Sullivan, on the other hand, avoided conflict and sought friendship with the very people Gilbert poked fun of.

When Carte formed the D’Oyly Carte Opera Company, he was able to produce the operas for the partnership. He then went on to continue showing the Operas, as well as influencing and licencing their performances, all over the world – enabling them to be enjoyed by everyone.

Common popular phrases originated in the Savoy Operas. Lines from them became popular in British culture.

Fact #7: They even inspired politicians

There have been judges that have added stripes to their robes, following the style of a robe in a Savoy Opera, as well as several politicians basing their speeches on the works of Gilbert & Sullivan!

Fact #8: Comedy was influenced by their works

The works of Gilbert & Sullivan have influenced the likes of Monty Python, TV shows such as Yes, Minister, and the way they used wit and satire in their work has influenced many comedy routines.

Since 1994 there’s been an International Gilbert & Sullivan Festival held in August of each year. Originally held in Buxton, Derbyshire, it is now held in Harrogate, North Yorkshire, with performances of the operas, as well as several fringe events being held.

Fact #10: The most popular Gilbert & Sullivan operas are still performed to this day

Thanks to the hard work of the D’Oyly Carte Opera Company and the Grim’s Dyke Opera, the ever-popular Savoy Operas are still regularly performed today.