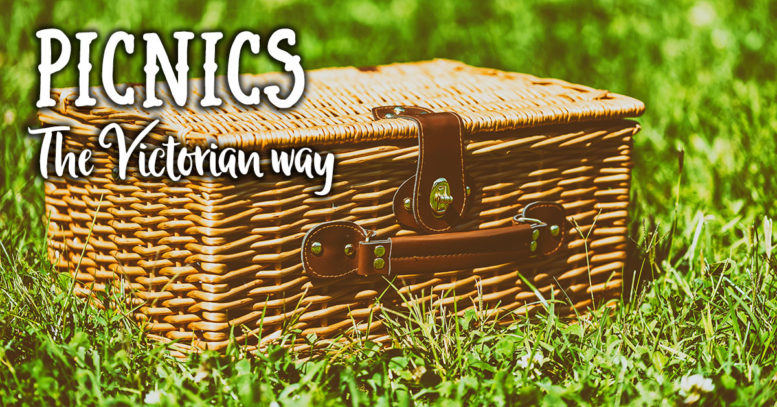 Picnics, the ideal opportunity to meet up with friends and family, enjoy an informal yet tasty meal, whilst having fun in the great outdoors. Wealthy landowners loved a good picnic, as it gave them the chance to sit and enjoy the scenery their estates gave them.

However, it was the Victorians who brought picnics to the masses. Their popularity was, in part, down to the fact it gave them a chance to spend a day with their families, when it was often difficult or impossible, for them to take longer periods of time off for holidays. However, picnics didn’t become popular until the mid-1800s, when they became fashionable and a serious pastime – especially during the summer season.

A picnic starts with a sturdy basket

All great picnics start with a sturdy basket. A square woven basket would be neatly packed with your food and drink items. Each individual item would be carefully wrapped in a napkin or paraffin paper, to protect it on its journey. If you wanted to keep sandwiches from drying out, you’d wrap them in moist napkins.

It was always a good idea to take crockery that could be left behind if needed, so wooden and paper plates were used, whilst tissue paper napkins replaced material serviettes. The only utensils you’d need to pack for picnics would be a sharp knife, fork, spoons, and salt and pepper.

Meat and fish featured highly on the Victorian outdoor dining menu. Picnic guests would be given a range of meats, including duck, ham, tongue, beef, fowl, lobster and fish. There was also a range of meat pies, potatoes, and soft fruits, to feed the hungriest of guests.

The sandwich was a staple of the traditional picnic. Sandwiches were designed to feed hungry children, so each one would be made from thick slices of whole wheat bread, filled with salad and salted meat fillings.

If you wanted to provide sandwiches for adults, you’d opt for white bread, as well as brown bread options, and you’d butter the bread before slicing it, to ensure you had thin enough slices. The meat was often sliced thinly, so you could put several slices into each sandwich, and they were then seasoned with salt, sauces or lemon juice. Popular sandwich fillings included salted meats, cheese, and even sliced fruits. Tinned fish such as sardines, were also taken with you on a picnic, along with a tin of crackers, so you could have these

Dessert was an essential component of the outdoor picnic. Again, guests would be given a wide variety of different desserts to choose from, with cakes, tarts, doughnuts, pastries, ice cream and blancmanges. Homemade pies were incredibly popular with picnic lovers too, as they were easy to eat in a more informal setting.

Beverages were supplied to cater for children and adults. Soft drinks such as lemonade and ginger-beer would be packed up and sent out for any picnic lover. Meanwhile, the adults looking for something stronger could often choose from sherry, brandy and wine. For colder days, a hot flask of tea was essential – but coffee was seldom used as, at the time, it would’ve been difficult to make in an environment away from the kitchen.

Picnics were made popular by the Victorians, but they’re still enjoyed today. The amount of food you take out on a picnic may have changed, whilst more people now opt for canvas backpacks, instead of traditional baskets. But no matter the setting, there’s still something special about getting away from it all and eating outside – as long as the weather stays nice, that is!