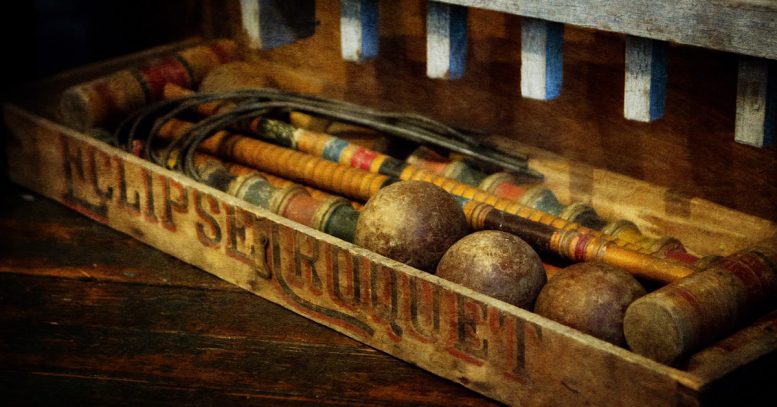 It is thought that croquet was introduced in England in the early 1850’s, although its origins are still unclear. It was considered a most suitable pastime for the Victorian women and young girls, with its popularity quickly spreading overseas too. Why? Because it could be played alone or with others, it wasn’t too taxing for females, didn’t need strength and tactics, but did need considerable skill – something Victorian women in particular, were known to triumph in!

By the 1860’s it was extremely popular. The Earl of Essex was known to hold lavish croquet parties at Casssiobury House, in Watford – he even launched his own croquet set! In 1868 the first croquet all-comers meet was held in Moreton-in-Marsh, Gloucestershire, and it was also in this year that the first All England Croquet Club was formed in Wimbledon.

The beauty of croquet was that men and women could play it together, without any special clothing and very little equipment, giving it both social and economic advantages. It was mostly played in private, behind houses and on private property and was considered to be one of the first mixed-sex sports. Women and girls were also known to routinely cheat – their long skirts were perfect for hiding subtle kicks against an opponent’s ball!

Croquet was played on a lawn and consisted of metal hoops embedded in the grass. Players each had a wooden mallet, which was used to hit wooden balls through the hoops. The lawn area was usually 32 feet wide by 40 feet long, with six hoops arranged three at each end of the lawn, and a centre peg in the middle.

There are four balls teamed in pairs, and both balls have to go through all the hoops, for a pair to win. If a player hits the ball through the correct hoop (called ‘running a hoop’), they can continue their go and have another stroke. Extra shots are allowed, when a player hits certain other balls with their own ball (called a ‘roquet’).

A player who scores a roquet, must pick up their ball and place it next to the ball that theirs hit. They then must play the next shot, with the two balls touching. This is known as a ‘croquet stroke’. A good player can control the end position of both these balls during this type of shot. After this croquet stroke, the player then must either run a hoop or make a roquet, if they want to continue with their turn.

By the late 1870’s croquet’s popularity was eclipsed by another popular lawn game. Although croquet had a brief popularity revival in the 1890’s, it became known as a minority sport, permanently overshadowed by the game that originally eclipsed it – tennis.

There is still a World Championship, organised by the World Croquet Federation (WCF). The governing body in England (The Croquet Association) is still the driving force behind the development of the game – with rules and tournament regulations being maintained by the International Laws Committee (established by the croquet associations of England and Wales, Australia, New Zealand and the United States of America).