Astaire and Rogers revolutionised the genre of musical film. First paired together in supporting roles for the film ‘Flying Down to Rio’ in 1933, they went on to pair in 10 Hollywood musical films during the golden age of Hollywood.

By 1936 Astaire and Rogers were top box office names – and is it any wonder! Their second film The Gay Divorcee was their first starring role and included the song ‘The Continental’ – an instant hit and an Academy Award winner for the Best Original Song in 1934. A year later they’d produced two more films – Roberta (as supporting actors) and Top Hat – the first musical film written solely for them.

Their 1936 film Swing Time included the Oscar winning song ‘The Way You Look Tonight’ and led American Political Scientist and scholar of the history of dance, John Mueller, to remark: ‘it contains the greatest dancing in the history of the universe’. 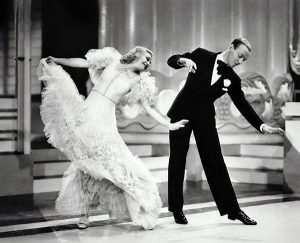 Astaire was given complete autonomy over how the dances were presented, leading him to revolutionise dance on film. He is credited with two important innovations – firstly, by insisting dance sequences were filmed in a single shot, whilst keeping the dances in full view, and the other; insisting that all song and dance routines integrated seamlessly with the film plotlines, serving to move the story along, as opposed to being standalone spectacles. These two innovations meant Astaire could be a bit of perfectionist. Swing Time consists of some of their greatest dances – sequences that took 47 takes to get right; resulting in Rogers dancing until her feet bled.

Together Astaire and Rogers produced some of the most profitable RKO Radio Pictures films in the 30s. Unfortunately, their last three films with RKO weren’t great studio successes. Carefree however, was considered by critics as one of their greatest. The Story of Vernon and Irene Castle marked the end of their partnership.

Ten years later, Astaire and Rogers reunited for their only colour (Technicolor) film – The Barkleys of Broadway. It was also the one and only film with MGM, and was a worldwide success.

Astaire had a film career that spanned 76 years. Gene Kelly, another Hollywood great, is cited as saying: ‘The history of dance on film, begins with Astaire’. Astaire was one of the greatest stars of classic Hollywood films. He starred in 31 musical films, went on to do televised dance and straight acting, as well as writing and co-producing several successful songs. Astaire won several Golden Globes and Emmy Awards, as well as the Lifetime Achievement Award from the American Film Institution in 1981 – he also received several posthumous awards – including the Grammy Hall of Fame award in 1999. Astaire died of pneumonia in 1987.

Rogers became one of the biggest box office draws of the 1940s and was, at one point during this time, one of Hollywood’s highest-paid actresses – although she was often paid less than her musical film co-stars. Rogers is associated with the phrase, attributed to a ‘Frank and Ernest’ captioned cartoon by Bob Thaves: ‘Sure he (Fred Astaire) was great, but don’t forget that Ginger Rogers did everything he did… backwards and in high heels’

Rogers successfully returned to Broadway in 1965, before taking her stage directional debut in 1985. She continued to make television appearances until 1987. Rogers died of a heart attack in 1995.

If you’d like to relive some of the great Fred Astaire and Ginger Rogers moments, why not join us on the 16th March 2017?

We’re delighted to be bring you an evening celebrating the golden era of Hollywood, as Robert Habermann performs Fred Astaire and Ginger Rogers. To obtain further information or to make a reservation for this event, give our reservations team a call on 0208 385 3100